We are all brothers and sisters 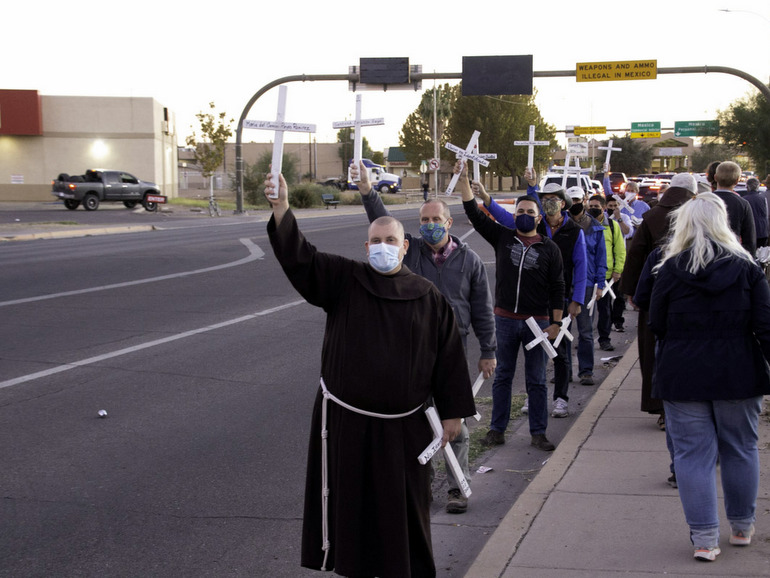 Br. Phil McCarter joins in a vigil remembering migrants who have died in the Arizona desert.

In late September, Phil McCarter and Kevin Hamzik (Holy Name Province), both currently serving in Elfrida, Ariz., joined the School Sisters of Notre Dame in a sobering task. They planted a permanent cross for a young migrant named Andres who died of dehydration while trying to cross the desert to the United States.

“He was coming to our country for safety and stability, the same reasons Joseph and Mary crossed the desert with the infant Jesus,” Phil said. “Just like Jacob and his sons, Andres left his homeland and headed to a land of abundance. Unfortunately, ancient Egypt was more hospitable than America is today. I pray we end this nonsense we have created at the border. I pray that the Lord Jesus will open our hearts so we can in turn open our borders. Andres was neither a criminal nor a burden. He was a son, brother, nephew and friend.”

Phil and Kevin are in ministry at the Migrant Resource Center in Auga Prieta, Mexico, just on the other side of the U.S. border, as part of Brothers Walking Together (BWT), the post-novitiate immersion/reflection program developed by Mike Johnson (HNP) at the request of the US-6 provinces. They, along with the other BWT participants, are spending nine months at their ministry sites after completing an orientation program over the summer. Brothers Walking Together is aptly named as temporary professed friars serve alongside one another and learn meaningful, practical and collaborative ways of ministering to those in need, while continuing on their journey of faith in Franciscan life.

“When migrants are caught by Border Patrol, they are sent into Auga Prieta,” Phil explained. “When they cross back into Mexico, they are welcomed at the Migrant Resource Center. There we give them food and water. We also have showers for them and fresh clothes for anyone who needs them, and since most of the people plan to cross the desert again, we refill their medical supplies for their next journey.”

“We are seeing about 100 migrants every morning that have been deported back into Mexico,” he said. “Recently, the number of women has increased from about 10 a day to 30 a day. We are not sure what is causing the spike. We are also spending one day a week at a temporary housing shelter for migrants in Mexico. The people there are usually from Central or South America and are in need of temporary housing until their families can make arrangements to bring them home.”

“We also have a vigil every Tuesday on the American side of the wall,” he added. “We hold a cross with the name of a migrant who died in the Arizona desert and say their name aloud. This vigil has been happening for 20 years and there are about 300 crosses each Tuesday, but the numbers keep rising.”

Friars Joan Perez Lombera and Brian Menezes are in ministry at St. Francis Inn in Philadelphia.

Brian Menezes is having a very different, but equally as meaningful, ministry experience at St. Francis Inn in Philadelphia. “I, along with my brothers and sisters, support the men and women who come seeking clothing, food, medicine and many other needs,” he said. “Some of the many tasks involve driving out and picking up the food from various vendors, receiving and interacting with guests and volunteers, answering the door and distributing the mail, sorting the foods (meats, produce and bakery) when they arrive, handing out meal tickets/ clothing vouchers, cleaning the dining room, kitchen, bathrooms and other common areas.”

“We acknowledged that life in the busy urban neighborhood has its challenges, from the noise and crime to roaches and rodents, but said the reward comes in meeting the needs of St. Francis Inn guests with hospitality, dignity and compassion. “Sometimes it can be as simple as providing a glass of water or just listening to someone having a bad day,” Brian said. “We may not end poverty anytime soon, but we help those in need make it through another day on the streets of Philadelphia.”

“I have found that it is often I that is on the receiving end of things from the brothers and sisters in the neighborhood,” Brian continued. “I learn about what’s happening in the neighborhood, the services they seek, and even challenge myself to be a better follower of Christ through my interactions. After spending much of my time in classrooms and indoors due to COVID, it is good to be able to get outside and to be able to minister to people in person by being present to our brothers and sisters around us.” 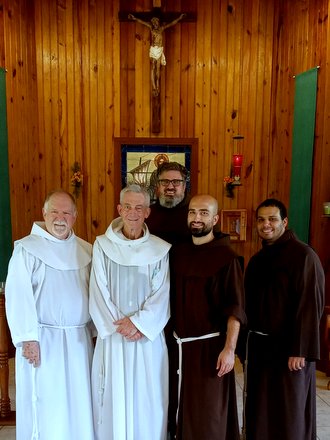 Daniel Cruz and Tyler Grudi (both of HNP) are engaged in a variety of ministries with the SJB friars in Jamaica, where much of their time is spent working with local school children. COVID cases are on the rise and vaccines are in short supply there, so schools are being operated online. Since many of the poor families don’t have internet access or tables, the friars open up the parish hall to a limited number of children every week day to allow for social distancing and operate a virtual learning center. They also assist the students with their schoolwork.

The brothers say they are growing both spiritually and personally from their experience. “On a personal level, BWT is teaching me patience, persistence and the value of the ministry of presence,” Daniel said. “Working with students with their schoolwork is sometimes very tiring and often we don’t see ‘results.’ However, our ministry partners are incredibly grateful for our presence and attention that we give the kids. Most kids in Jamaica have never met their father and most don’t have an adult male figure in their home, so it is important for us as friars just to be with the kids.”

Tyler said he feels the interprovincial nature of BWT is contributing to a sense of unity as the six provinces move toward becoming one. “I know the idea of merging the provinces might intimidate friars or cast some doubts about the future, but my brothers and I have been living interprovincially our whole formation,” he said. “The unity of the six provinces is basically all we know. I applied to Holy Name Province, but I’m currently living in a St. John the Baptist friary. Yet, when I came to this house, I was welcomed like one of their own in a fraternal embrace, and that’s the kind of attitude all the houses should start embodying. We are all brothers. I’m thankful for all the communities in BWT for opening themselves up to us, but also taking a chance on being interprovincial and leading the way for our future as one province.”

As Franciscans, Brian added, “We are called to uphold the downtrodden (the poor, marginalized, suffering, persecuted, undocumented, sick and many more). The interprovincial formation program is a reminder that we welcome and work for all God’s creation by offering ourselves to people in need, especially to the many who have been forgotten or ignored by society. We remind them that, through Christ, we can live joyfully and in harmony when we work together for the good of all our brothers and sisters throughout the world.”

We need a lot of Christmas