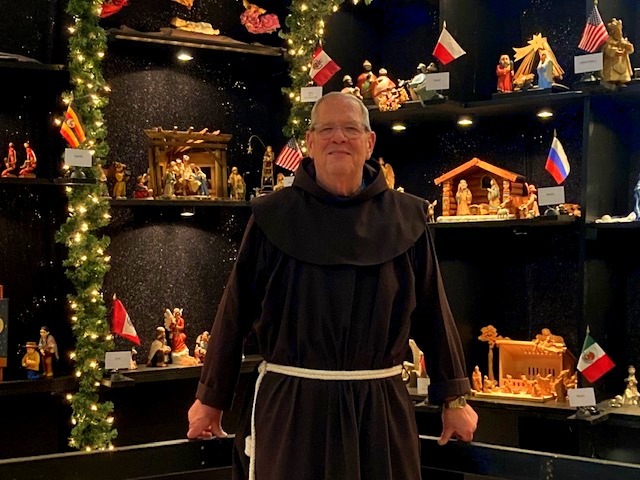 A Franciscan Christmas in Cincinnati

The desire to enter into relationship with others and bring them joy are Br. Tim Sucher’s inspirations for A Franciscan Christmas, the annual display of his collection of Nativity scenes and Christmas decorations at St. Francis Seraph Church and Friary in Cincinnati, where he is pastoral associate and guardian. 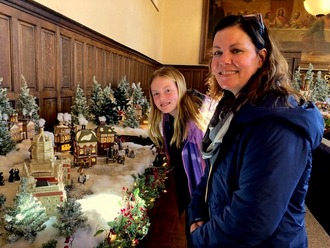 Susan Thiemann and her daughter, Willow, enjoy a visit to Dickens Village.

Br. Tim’s love for the Christmas season goes back to his childhood and the example of his father, who grew up in a home wrought with alcoholism that worsened over the holidays. “When he got married and had his own family, my father wanted to make sure that Christmas was always a very special time for us,” Br. Tim explained. “He was quite the Christmas buff.”

With their mother hospitalized in December of 1957, Br. Tim and his older brother spent Christmas with their maternal grandmother. Fascinated by the 12-inch figures in her Nativity set, the boys began saving pennies to buy their own – one “just like Granny had.” It’s still part of his collection today, complete with a stable built by his father.

Over the years, through his own travels or those of other friars, along with donations, Br. Tim estimates he has amassed some 70 Nativity scenes from all over the world. Of particular note is one created by Fontanini, an Italian company that has been making crèches for more than 110 years. This particular set contains 75 pieces and is impressive in its beauty and detail.

“Everyone in Bethlehem is there, from little kids to animals,” Br. Tim said. “It really speaks volumes about the Incarnation and that Jesus came for all of creation.” 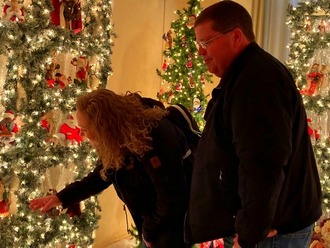 Jeanne and Dan Unger take a closer look at the Santa Land display.

Other Nativities that stand out for Br. Tim are those from various African nations, including Kenya. “The Mary figure is just so strong,” he said.

Then there’s a Native American scene, with all of the figures depicted with round mouths. “This emphasizes their oral tradition. I think that’s just fascinating,” Br. Tim said. “Every culture has a different way of telling the story, in a way that reflects who they are, but it’s the same story.”

He is quick to point out the very Franciscan aspect of the collection. ““For St. Francis of Assisi, the Incarnation was at the heart of his faith; the fact that God became a human being was central to him,” he explained. “I think with Francis’ experience at Greccio, he longed to celebrate Christmas in a unique way. He wanted to see the sights, smell the smells and feel the feelings of that first Christmas. I like to think I’m following in that tradition, so that each person has a unique experience.” 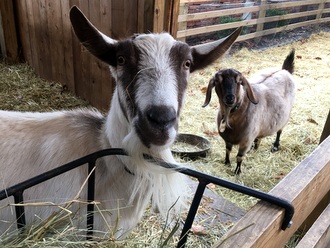 A few goats in the live nativity.

Also on display are a collection of Santa Clauses and the charming Dickens village, complete with a model train running through it. Br. Tim estimates it takes him and a crew of dedicated volunteers a “good month” to unpack everything and get it set up in time for visitors when A Franciscan Christmas opens after Thanksgiving.

If the crèches and other displays aren’t enough to get them in the Christmas spirit, then there’s the live manger scene in the courtyard of St. Francis Church, featuring donkeys, sheep, goats and realistic, life-size figurines. Just steps from the busy intersection of Liberty and Vine streets in Cincinnati’s Over-the-Rhine, the live Nativity is designed to be accessible for visitors near and far to experience the miracle of Christ’s birth. “It’s a way for people to enter into the experience,” Br. Tim said. “I’m grateful people from the neighborhood get to experience it: the poor and the homeless, kids who might never see sheep and goats.”

The displays and decorations are truly a labor of love for Br. Tim. “It’s about love,” he said. “As a Franciscan, that’s the message I want to get out to people: God’s love for all of creation. Isn’t that what the Incarnation is all about? God entered into relationship with us by becoming one of us. For me, this is an opportunity to enter into relationship with people. If I’m going to follow Jesus’ example, then I want to do what He did.”

For hours, directions and videos of the displays read: A Franciscan Christmas 2021. 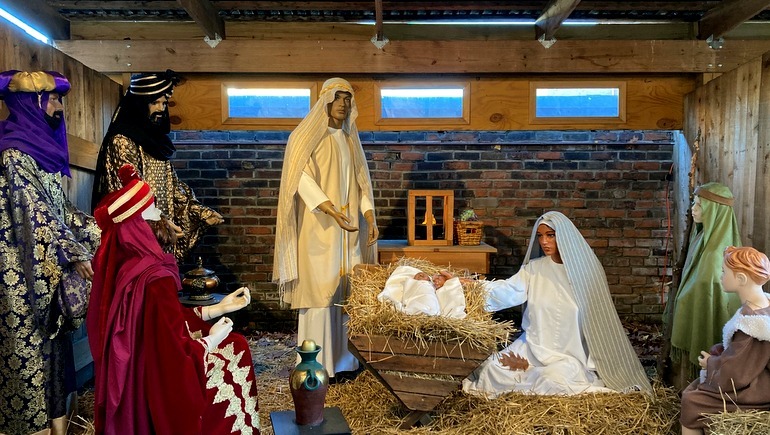 The outdoor nativity scene in the courtyard of St. Francis Seraph

Christmas around the province