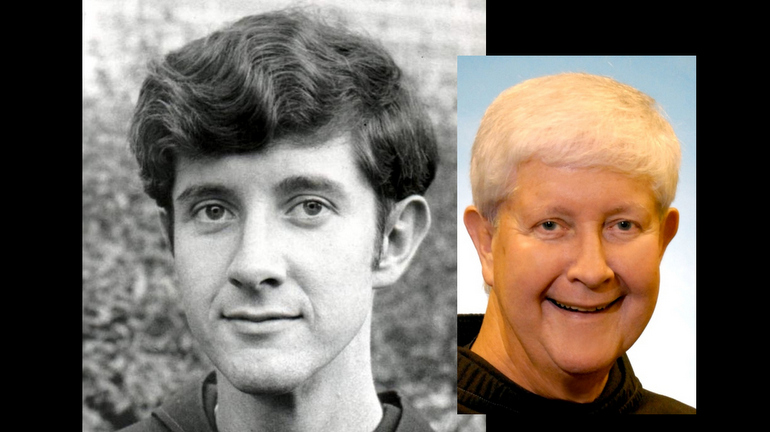 Fr. Carl Hawver, OFM, as a young friar and in a more recent photo.

Rejoicing in the Lord always 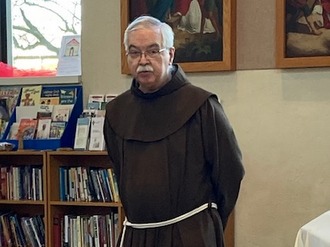 In sharing their memories of Carl Hawver, who passed away Dec. 31, family members, fellow friars, friends, former students and those who responded to news of his death on social media, all commented on his love for singing and his clear, robust voice.

“I’ll never forget our Father Carl, who was always upbeat and charismatic,” said Susan (Mitchell) Maloney via Facebook, a student at Bishop Luers High School in Ft. Wayne during Carl’s tenure there.

Those who gathered for Carl’s Mass of Christian Burial at St. Clement Church in Cincinnati on Jan. 5 rejoiced in his life and ministry, care and concern for others, and his expressive, often flamboyant, nature. The assembly included Carl’s school classmates from Springfield and members of the Sisters of Charity of Cincinnati and Oldenburg Franciscan Sisters. Provincial Minister Mark Soehner was the presider, with Pat McCloskey, Carl’s profession classmate, as the homilist.

“Carl was an educator all his life, no matter what his ministry.” Pat said. “He was 23 years in high school ministry, stretching students, affirming them: ‘God is with you, even though it may not seem like it in the moment.’” 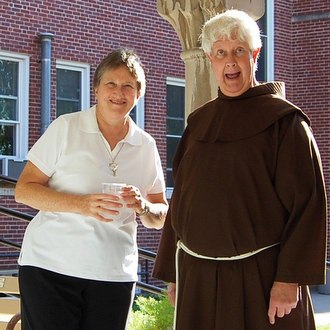 Sr. susan Marie Pleiss, OSF, and Carl enjoy a joke while volunteering at the Oldenburg Franciscan Center’s fundraiser in 2013.

Regarding Carl’s other ministries, which included serving as chaplain for the Oldenburg Sisters and director of the Office for Senior Friars, Pat added, “He was with many sisters and friars in their last days. I can’t imagine anybody I would be more happy to accompany me at that time of life.”

Rejoicing in his family and friends

During the presentation of the gifts, Sr. Karen Hawver, SC, performed a beautiful rendition of “I Have a Dream” (Anderson & Ulvacus), which she and younger brother, Carl, often sang together. Of Carl’s three older sisters, Karen was closest to him in age, and said, “We’re just 13 months apart and grew up together. I took care of him and he took care of me.”

She recalled that Carl left home to join the Franciscans the same week she entered the Sisters of Charity of Cincinnati. “He loved the Franciscan spirit, their ministry, their poverty, their prayer and love for God,” Karen said. “The friars are very humble and kind, and that was appealing to Carl. Our parents were very proud of him.

Music was part of every family gathering, baptism and wedding over the years, she added, saying, “Carl had such a great voice and made everything a celebration. He just loved life and loved our whole family so much.”

Sr. Karen Hawver, SC, sings in memory of her brother at his funeral mass.

Carl’s niece shared that her uncle would joyfully involve all of the nieces and nephews in serving Masses at home. “We loved him for it,” she said.

Susan Obringer came to know Carl through her sister, Sr. Mary Ann Fox, SP, who served with him at Bishop Luers and became a longtime friend. Although Susan’s family moved often due to her husband’s work, they stayed in close contact with Carl over the years. She gratefully remembered Carl’s presence in a hospital waiting room with her while Mary Ann had surgery, and his calming touch when holding her cranky infant granddaughter.

“That was the beauty of Carl,” Susan said. “He was just so willing to always be present.”

“Carl was a friend and we always got along very well through formation and after,” said profession classmate Jim Bok. “He never called me Jim. It was either Jimmy or, more frequently, James Michael. I always enjoyed that, and he never greeted me without a smile on his face and a sense that he was very happy to see me. Carl loved to sing, and he had a wonderful voice. I, and we, often enjoyed his ‘performances.’ Even his liturgical singing had a distinctive ring to it.” 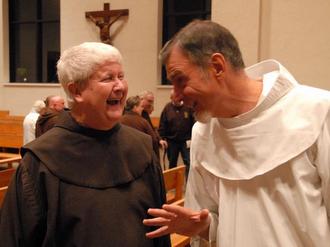 Bert Heise, who lived with Carl for a number of years at St. Margaret Hall, where the friars receive loving care, said, “Carl had a tremendous voice and knew everything by heart.”

Rejoicing in his students

Carl’s first assignment after ordination in 1974 was teaching at Roger Bacon High School in Cincinnati. Jim, who taught with him for a couple of years, said, “He was a no-nonsense guy, and I remember his wagging finger at students who needed a ‘little direction.’ One student was in hot water with Carl on a regular basis. That never caused Carl to dislike the kid or give up on him. Some years later, that student wrote to thank Carl for hanging in there with him. I very much enjoyed that.”

“He was such an inspiration to me at Bishop Luers,” Susan Maloney said. “Because of him and the spirit of the Franciscans, I am a professed SFO and belong to the Holy Family Fraternity here in Ft. Wayne.”

As Carl prepared to leave Bishop Luers in 1985, then-Principal Mary Lombardo said, “We are going to miss the creative and loving spirit that Father Carl brought to us and to the student community every day. We are going to miss his way of talking to a person’s heart. It is very hard, though, to assess the impact Father Carl has had on the Luers community for it is immeasurable” (from the Harmonizer, newspaper of the Diocese of Fort Wayne-South Bend, June 14, 1985). 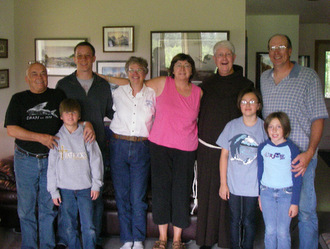 Carl visits with the Catholic community in Gustavas, Alaska, in this 2011 photo.

“Carl cared deeply for his students, and, in particular, cared that they felt free to be themselves, recognizing that their true selves were the people that God loved unconditionally,’’ said Dan Anderson, also a profession classmate.

Among Carl’s joys in ministry were his summer trips to Alaska, where he served as self-described “rent-a-priest” in the Diocese of Juneau. The nature lover in him appreciated the majestic beauty there and he welcomed the opportunity to be present to the people. In the July 20, 2011 issue of The Southeast Alaska Catholic, Carl recounted the experience of two week’s service in Yakutat’s St. Ann Mission, where 12 residents had passed away, eight of them due to fishing accidents.

“Such situations of tragic loss impact families and cultures profoundly,” he said. “In such circumstances, people of faith come together to pray, mourn and grieve, asking the God of Life to grant everlasting rest to the departed, and comfort and compassion to those who remain. In such times as these, our liturgical prayers and Scriptures can help those whose loss is great to find hope in the midst of profound sorrow. 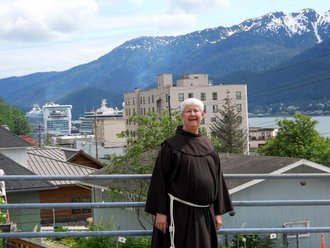 Behind Carl, who loved his trips to Alaska, is downtown Juneau, a cruise ship in the harbor and Mt. Juneau.

In his homily, Pat referenced the Gospel passage Carl had chosen for his funeral Mass: John 14:1-6, in which Jesus tells His disciples, “I am the way and the truth and the life. No one comes to the Father except through me.”

He went on to speak of how Carl’s ministries with the St. Leonard Community, the Franciscan School of Evangelization and St. Francis Retreat House assisted people who were asking, “where is God leading me?” amid health, family and other challenges, find what they were seeking.

“Carl treasured his family of origin, his adopted Franciscan family and all the people God brought into his life,” Pat said. “We come to this litugry to thank God for the gift of Carl’s life, to thank God for the way God showed mercy and compassion through Carl. May that be our consolation.”