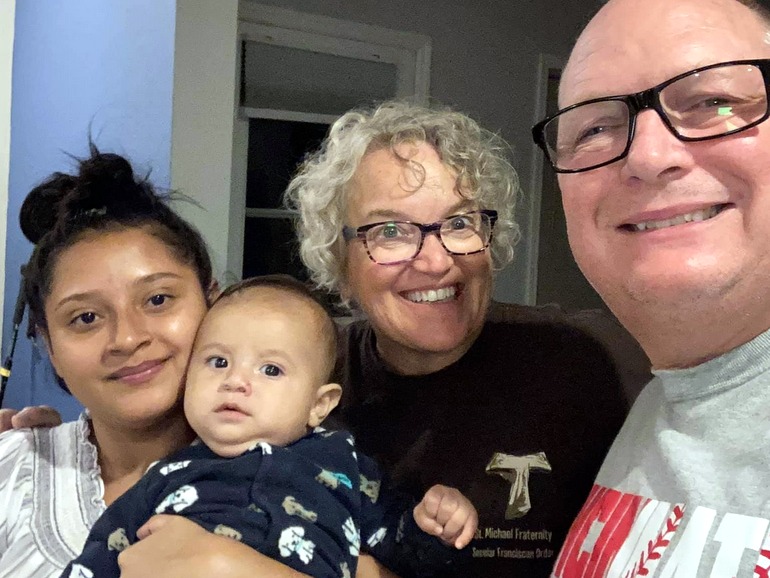 Colleen and John Gerke, right and center, pose for a photo with guests Rosa and baby David.

A simple plaque on a wall in John and Colleen Gerke’s St. Bernard home proclaims a deeply meaningful message. It reads in part: “This is a Franciscan House. That means you are welcome here. In the spirit and love of St. Francis of Assisi and Jesus of Nazareth, we welcome you.”

It’s a message the Gerkes, both Secular Franciscans, take to heart at home and in their ministry at St. Clement Parish, where John serves as pastoral associate and Colleen as director of faith formation. Over the years, the couple has frequently shared their home with others who need a safe, welcoming and holy place to stay. Their current guests are Rosa, a 21-year-old Honduran women, and her young son, David, who fled a dangerous situation in their home country last year.

The Gerkes learned of Rosa’s plight from David Inczauskis, SJ, a visiting faculty member in Xavier University’s Department of Classics and Modern Languages. David, who is involved in Hispanic ministry at St. Clement, has worked on social justice issues through the Society of Jesus, including the suffering of many people across Honduras. He met Rosa and her brother in a Honduran orphanage and became her padrino (godfather). Determined to help Rosa, he reached out to the Gerkes for assistance. They didn’t hesitate to welcome Rosa and baby David, who was just six months old when mother and child arrived in the United States last summer.

“We have a long history of saying ‘yes,’” Colleen said. “We’ve housed women in unplanned pregnancies and refugees hoping to get reestablished in the United States. It’s just something we’ve always done. It’s who we are.”

“Hospitality is part of the Franciscan charism that we live. We’re a Franciscan household,” emphasized John.

As Rosa’s sponsors through the ISAP (Intensive Supervision Appearance Program), the Gerkes have agreed to provide for any financial or medical support Rosa and David need, along with food, housing and legal fees. Rosa hasn’t shared much of their story with them thus far, “not because she doesn’t trust us, but because she doesn’t want to burden us,” John explained.

What they do know is that the father of Rosa’s baby was abusive and a member of a Honduran drug cartel, which put her life at risk. Fearing for her baby’s life, Rosa and little David fled Honduras, crossing Guatemala and Mexico, eventually ending up in McAllen, Texas. Most of their journey was on foot, with part of it made in the luggage compartment of a tourist bus. The danger that Rosa and David faced in Honduras became reality when the young woman learned that her childhood friend had been shot and killed, allegedly by the cartel.

Thanks to the Gerke’s hospitality and the warm welcome Rosa has received from the friars and parishioners at St Clement, she and the baby, who was baptized by John last fall, are settling into life in a place where they can feel safe and secure.

“She tells us she feels safe here, but it’s been hard for her knowing that friends and family in Honduras are in harm’s way,” Colleen said. “She’s been slowly making friends and really becoming part of our Hispanic community. That common language, common set of values and shared faith are so important to her sense of belonging, and she’s found that here.”

“I feel blessed and thankful. It’s a blessing to have them as my support and anchor. We all arrive in this country to start from zero, and, thankfully, God put them into my life. They have welcomed me with love as another member of their family,” she said via a translator. “The parish has been excellent. It has been part of my strength in this moment. I am very excited since this is part of a promise, I made to God to serve Him. This is one more step towards God. It’s been a beautiful process. I have been learning a lot.”

For the Gerkes, this step for Rosa on the journey of faith serves to further affirm their decision to welcome mother and son into their home.

“They deserve more than what they had,” Colleen said. “They deserve to feel safe and like they belong. This is a reminder that we are called to be brothers and sisters to everybody.”

“I don’t see how you can call yourself a follower of Jesus Christ and not help someone when you’re invited to do so, if you have the means,” added John. “That’s what people of faith do.” 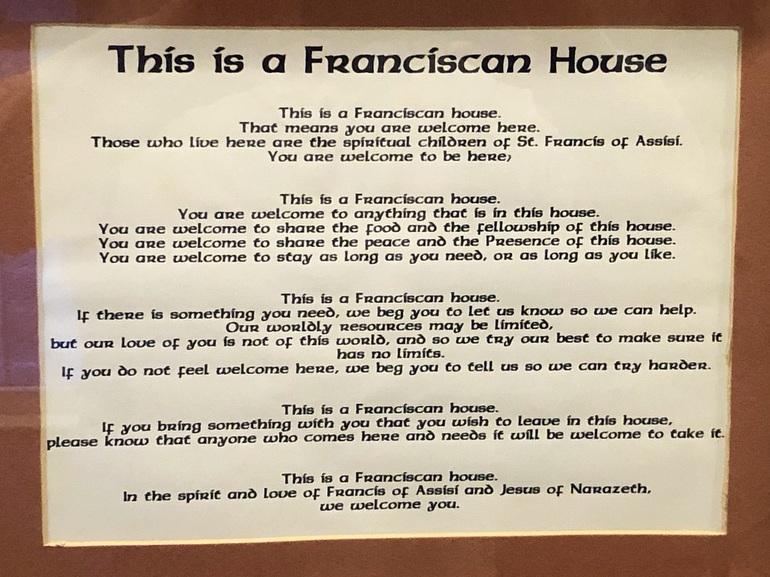 A plaque proclaims the Gerke home to be a Franciscan one.

Prayers on a plane

Renewal of vows: shining with love for our world.