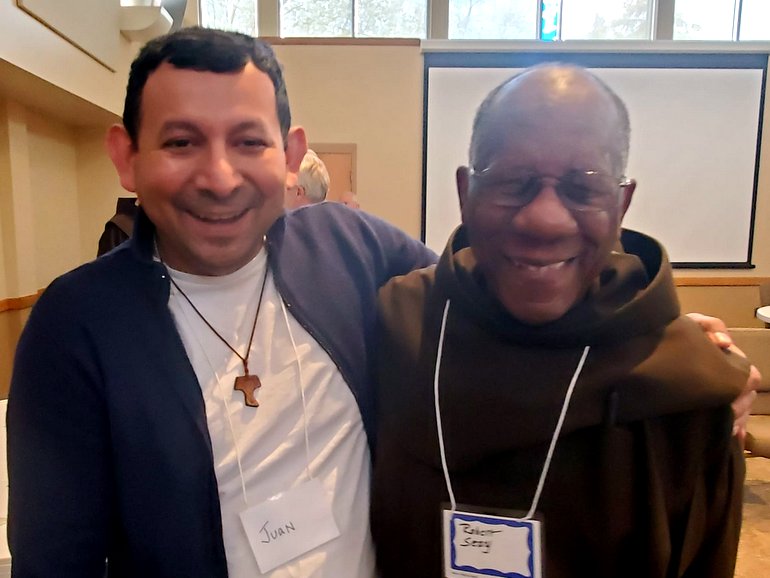 As the six US provinces continue on the pilgrimage to become one, more than 20 friars gathered in Detroit May 3-6 to recall their vocations and envision a renewed future for Franciscan life. The first Gather and Discern event was held at the St. Paul of the Cross Passionist Retreat & Conference Center. Most of the participants were from SJB Province. 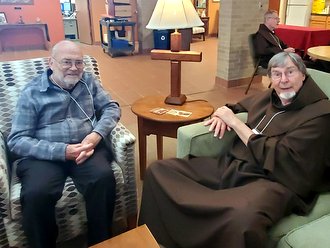 Over the course of two and a half days, Keith Warner, OFM, (SB) led the friars through a series of exercises designed to engage them in the renewal dimension of the unification process. For example, the friars presented their own provinces’ recent key news stories; developed suggestions for the various working groups; and wrote letters featuring their hopes and prayers to be shared at the gathering for friars age 65 and under, scheduled for July 25-29 in Kansas City.

In his letter, Jeff Scheeler shared his prayers that the group will be creative, compassionate, courageous and wise. “These are the things I pray for regarding my own life and spirituality, and I pray that these gifts will be present at the Kansas City gathering and moving into the future,” he said.

“I think these gatherings are so important as the chance to get to know each other better, and that takes time and effort,” Jeff said. “I felt our Detroit gathering was very helpful. There was a very positive feel to it and the attitude of ‘Let’s go! Let’s do this!’” 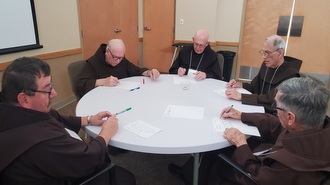 The Detroit Gather and discern event provided plenty of opportunity for the friars in attendance to pray, to get to know one another better, share their stories and envision a future as one province.

“I thought the gathering was very positive and the exercises were helpful,” said Robert Seay. “I appreciated the chance to see friars I haven’t seen for a while and meet new people. I think planning for change is important, but you can only plan so much. It’s the same way with fraternity. Friendships and fraternity don’t happen overnight. You have to work at them, and I think it’s important to remember that moving forward. This gathering was a good opportunity to help us with that.”

He encourages his fellow friars to participate in future gatherings and to come with “an open mind.”

Philip Wilhelm agreed, saying, “I think there’s a lot to be offered at such gatherings. It’s a chance to listen to the conversations, offer your opinion, share and learn. The big thing is being able to listen to one another with an open heart.”

“I found the gathering to be very useful and hopeful regarding what the future will be,” added Philip, who experienced inter-provincial community during his time in the Philippines, living with Filipino, Italian, Spanish, Yugoslavian and Salvadoran friars. “I really enjoyed it. We learned to adapt to one another, and it worked out beautifully. Yes, we sometimes had disagreements, but we recognized and shared our gifts, and that helped us become one.” 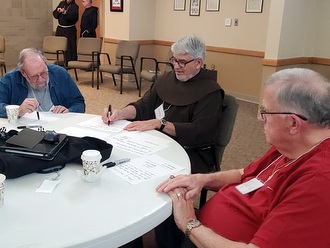 Greg Friedman (OLG) said he felt the event was particularly significant as the first time many friars have been able to gather in person since the start of COVID, and he was impressed by “how remarkably non-provincial” it was.

“Overall, friar engagement was very good,” he said. “I thought the group rose above non-provincial thinking to focus on being a new province. There was a lot of fraternity, and as the process continues, I believe we’ll see even more of that and it will move us along.”

The youngest friar at the gathering, Juan Turcios, OFM, (HN) said, “It was very nice to be able to share this pilgrimage together. To hear the wisdom and experience of some of the older friars was very enlightening for me. They have concerns that I don’t, but I know we are definitely walking together and that the Spirit is at work.”

Especially meaningful for Juan was hearing the other friars’ stories, and he emphasized the need to continue to listen to one another. “As we shared our stories, I realized that even though they are different, what we share is a love for Franciscan life, living the Gospel, caring for one another and for others,” he said. “Even though the needs and concerns of the younger and older friars are different, the reasons why we chose and live this way of life are the same.” 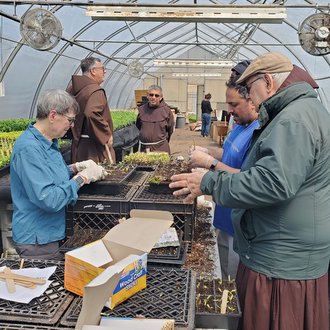 “I think in order to create unity among the friars, to have a better understanding and appreciation of each other, it’s important to listen to one another as we walk together on this pilgrimage,” he added. “It doesn’t matter if you’re in formation or an older friar, these gatherings are a good opportunity to get to know one another better and remind us that we are in this together, that God is with is, on this step we are about to take.”

The Detroit event also included a presentation by Larry Ford, OFM, (HN) director of the Revitalization and Restructuring (R&R) Office, who updated the group on what’s happening with the process to date, including the activities of the working groups and the involvement of Grant-Thorton. The friars also took part in two outings, visiting the Capuchins’ Detroit outreach–an urban farm–and the museum and tomb of Blessed Solanus Casey.

The next Gather and Discern is scheduled for June 21-24 in Danville, Calif. More events will be offered in the fall. 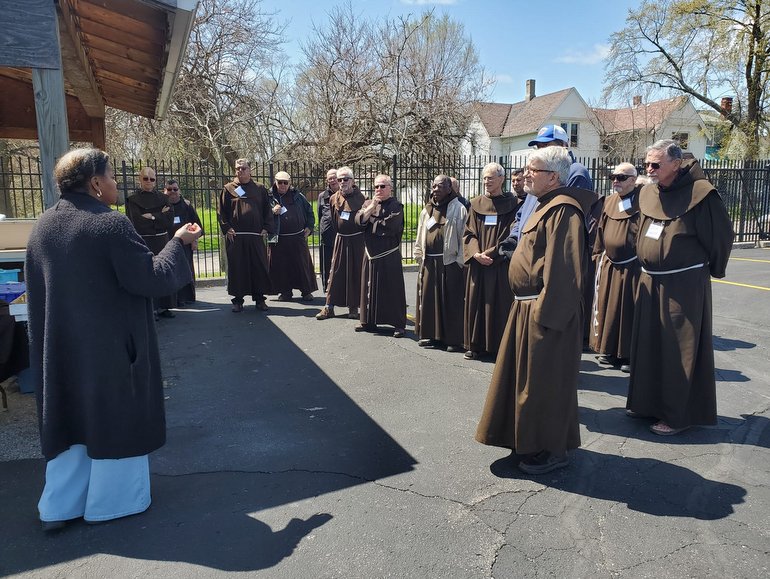 The friars visited the museum and tomb of Blessed Solanus Casey.

Hope for a school in Jamaica

The jubilarians may surprise you