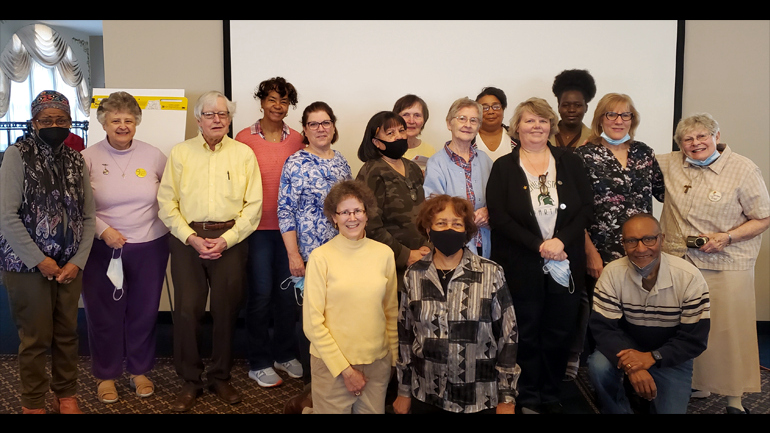 It started when two committed women of the parish, one Black, one White, asked to speak with me. We had just come through the terrible months of racial unrest in 2020 and 2021, which began with the murder of George Floyd in May of 2020. The women were passionate about the need to do something in our parish. We explored some possibilities and became aware of programs offered by JustFaith Ministries. With the help of Vickie Figueroa of the Office of Black Catholic Ministry of the Archdiocese of Detroit, we decided to do a 10-session program called “Faith and Racial Equity: Exploring Power and Privilege.” We also decided to open it up to members of our Family of Parishes. We started with over 20 people, but a few had to drop out because too many other events interfered with ongoing participation. In the end, we had about 16 members of four parishes participating.

The women gathered a team of like-minded parishioners and took an online training program. Over several months, they met and planned a program that would go for 10 sessions from January to May of 2022. The facilitators met between each session, as well. The program began with a half-day retreat, followed by eight sessions of prayer, discussion and learning. About halfway through, we had an immersion experience where we visited the Detroit Catholic Pastoral Alliance, which works out of Sacred Heart Church in Detroit. There we learned from people who had been committed for years to working to fight racism in Detroit, with members of the group committing to being “Change-Makers.”

We began with an information session because we realized this was a major commitment, and we wanted people to know what they were getting into. In preparation for each session, we read White Fragility; Why It’s So Hard for White People to Talk About Racism by Robin Diangelo; I’m Still Here: Black Dignity In A World Made For Whiteness by Austin Channing Brown; and 40 Days of Prayer: For the Liberation of American Descendants of Slavery, complied by Cheri Mills of Simmons College of Kentucky. We watched YouTube videos, TED talks and PBS programs in preparation for each sessions, with learnings recorded in a journal.

I participated in almost all sessions. I had a funeral one day and left early for confessions on a few occasions, but the facilitators led the program. As a pastor, I was thrilled that this program was initiated by and led by a team of parishioners. As we listened, I think we all grew in understanding from our discussions, but especially, as we heard personal stories. We spoke of attitudes that we grew up with. We shared the experiences of racial difference that we had growing up.

One parishioner shared her experience as the first Black student to integrate a Catholic school. She also spoke of her palpable fear for her college age daughter who wanted to travel alone to a gathering in a distant city. Another Black parishioner spoke of her mother who was the matriarch of her neighborhood. Because of her hospitable spirit, she constantly had visitors coming to her house for coffee, conversation and support. One day the police came angrily banging on the door assuming there was drug trade going on because of the number of visitors. A Black participant from Africa spoke of the divisions in her home country. White participants became aware of the privilege that surrounded their experience and grappled with and came to own the White supremacy that is so prevalent in our country. We came to understand racism not just as the prejudice and discrimination that we too often witness, but as something systemic that advantages some people over others based on race.

We ended with a commitment to stay in touch and to do something with what we learned. Everyone committed to do or say something when they experienced a racist comment or action. We committed ourselves to continue reading and learning. Writing this article was one of my commitments! This also led to my preparing a prayer service for racial justice and healing following the shooting in Buffalo. There was a general consensus that we should offer the program again. It is a commitment, but one that was well worth the effort.

The jubilarians may surprise you