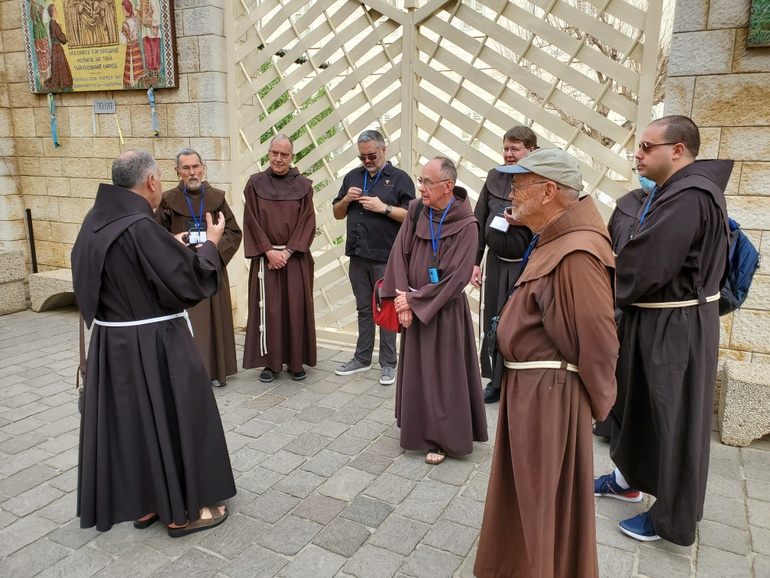 I recently made an eight-day pilgrimage to the Holy Land with the Franciscan Pilgrimage Program. There were 10 of us friars participating in this pilgrimage. Part of the purpose of this pilgrimage was for each of us to get to know some friars of other provinces as we prepare to become one province in 2023.

A statue of Jesus memorializing the scourging at the pillar and the fourth station on the Via Dolorosa in Jerusalem.

After flying to Tel Aviv, we went by bus north to Nazareth for a couple days of visiting the holy places associated with Jesus’ childhood. We stayed at the Casa Nova guest house, and had Mass at the St. Anne Chapel in the Church of the Annunciation. That afternoon we traveled to Mount Tabor, the site of Jesus’ Transfiguration. The next day we visited Capernaum, where Jesus began His public preaching, and celebrated Mass in the very modern church above the home of Peter. We went to Tabgha, and then to the beautiful church on the Mount of Beatitudes for some time of prayer and reflection. Then it was on to the Sea of Galilee for a boat ride, followed by lunch at Ain Gev. We visited the Chapel at Cana, the city where Jesus turned the water into wine. The next day we traveled through the Jordan valley to Jericho and then to Temptation Mount. We visited the Dead Sea and some went floating in the heavy salt water. Then we went on to Qumran, the site where the Dead Sea Scrolls were discovered. 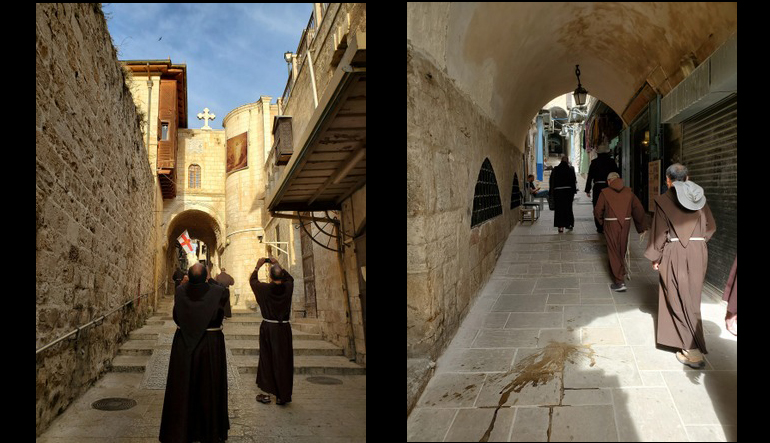 There were plenty of photo opportunities for friars on the pilgrimage; Pilgrims traverse a narrow street on the Way of the Cross.

We had Mass at Bethany, and went on to Bethlehem and our next hotel. We celebrated Mass in Bethlehem and visited the cave in the Shepherd’s Field. Next we saw the Church of the Visitation in Ain Karem and visited the Holocaust Museum. On Friday, we went to the Mount of Olives, Bethpage, Churches of the Ascension and Pater Noster. Then to the place where Jesus wept over Jerusalem, to the Tomb of Mary and the Garden of Gethsemane and on to Mount Sion. We saw the Upper Room, where Jesus celebrated the Last Supper, visited the Jewish Quarter and ended the day with a Holy Hour at the Church of All Nations. On our last day, we had a 6 a.m. Mass at the Holy Sepulchre, visited St. Anne’s Church, the place of the flagellation and walked the Via Dolorosa praying the stations. On Sunday, May 22, we flew home, and I arrived in Cincinnati on Monday afternoon, after an overnight delay in Toronto without my suitcase, which finally arrived home on Friday. 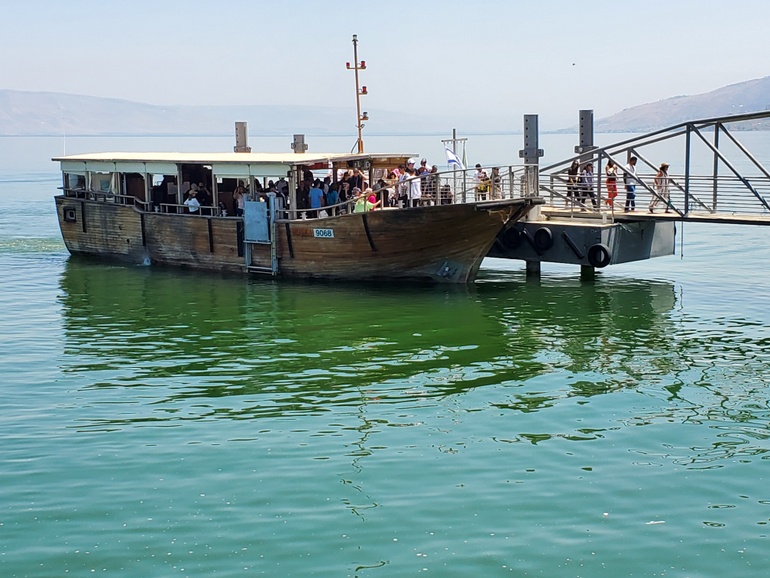 Friars took a boat ride on the Sea of Galilee

I had visited the Holy Land back in 2000 for the Jubilee Year, and was amazed this time by the many changes, especially constant, bumper-to-bumper traffic, and the huge amount of construction of high rise apartments and buildings on every hillside. Everything seemed busier than before, with cars parked everywhere, and pilgrims visiting the shrines in great numbers. Our leaders took us to as many shrines and places of interest as possible in the morning, trying to beat the heat and the crowds of people. Vendors were everywhere, trying to sell their souvenirs and trinkets. The hardest thing for me was to try to imagine what the various holy places looked like 2,000 years ago, as described in the Bible, before all the building, wars, destruction and rebuilding took place. The deep faith of the many generations, as evidenced in the varieties of decorations in the shrines and churches, was very moving to me, and helped me see past the current commercialism and centuries of construction and development. I appreciated the knowledge and experience of our leaders, but sometimes felt overwhelmed by all the history, archaeology, varieties of theology and other details that marked every visit to every shrine and city. 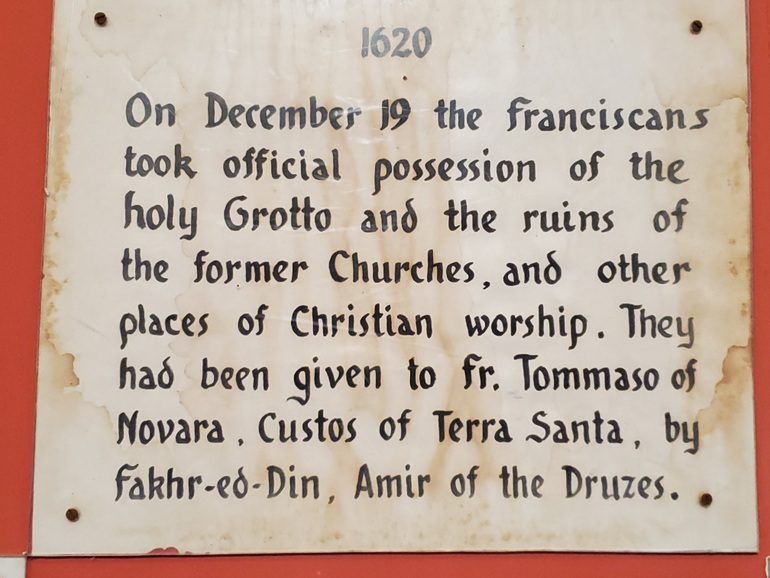 A plaque details the Franciscans’ role at historic sites.

I got to know the other nine friars and see aspects of their personalities in action as we traveled around the Holy Land together for the eight days. The friars who serve in the Holy Land shrines and churches were very friendly and accommodating for us and our needs, especially for the Masses we celebrated. I recommend that anyone who can walk the rough sidewalks and streets and steps take advantage of an opportunity to visit the Holy Land. I felt safer there than I do in some of our U.S. cities and towns.

Baseball and evangelization make for a winning combination