An experience of God’s grace 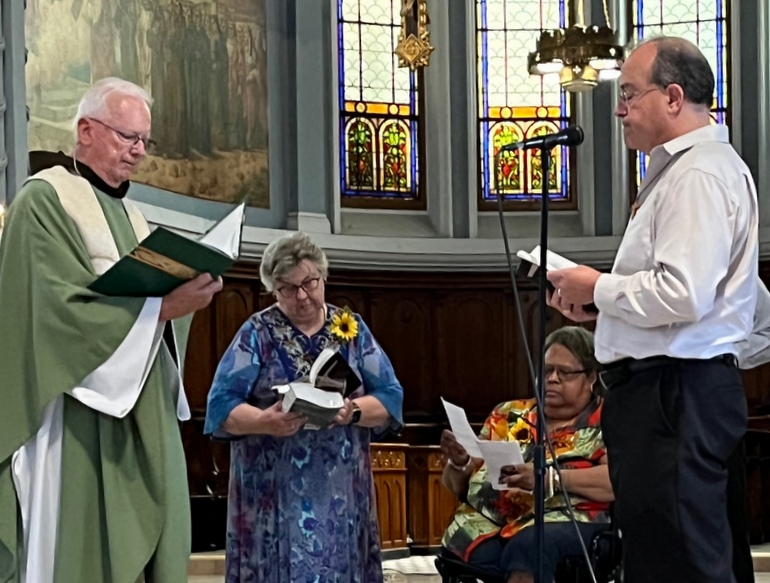 David O’Brien, OFS, has described being hired as Chief Financial Officer for the Province of St. the Baptist in 2007 as “an experience of God’s grace.”

The same could be said as David made his profession into the Secular Franciscan Order during Mass at St. Francis Seraph Parish on Sept. 4, in the presence of his family, a number of friars, members of the St. Margaret of Cortona Fraternity and parishioners.

David expressed his gratitude for the impact the friars’ faith and example has had on him, his wife, Michelle, and their sons. “The Franciscan charism has really shaped our lives, and being exposed to the friars’ Christ-like love has changed me and the world around me,” he said. 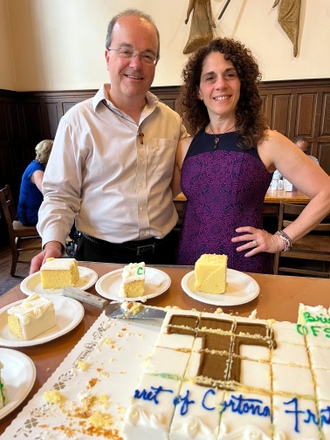 David and his wife, Michelle, pose for a photo.

His respect and love for that charism deepened over the years, and conversations with John O’Connor, OFS, who serves on the province Investment Committee, as well as on the boards of several sponsored ministries, made the possibility of becoming a Secular Franciscan “even more concrete and real for me,” David noted.

He also mentioned his interest to Provincial Vicar Bill Farris during a performance review as part of his spiritual development as a servant leader within the province.

“Father Bill gently, but firmly, challenged me a bit not to wait too long or for the circumstances to be perfect before taking that next step,” David said. “I was concerned about balancing formation with seeing my sons through their high school and college years, but he reminded me how wonderful it would be for them to experience this with me.”

“It is a nuanced set of things that attracted me to the OSF, the main element being that I found I could relate and share Franciscanism, but on a level with others in the same state of life,” David added. “There was a very important difference there that translated to more complete conversations, understanding and mutual support and empathy, for example, paying the bills for the household, job concerns, etc. So, the Secular part really did matter, and as I went through the introduction to St. Margaret of Cortona Fraternity and got to know the sisters and brothers there better through formation, I thought ‘Oh, this really is a fit for people like me.’”

Formation, which David began in early 2020, primarily involved a significant amount of reading, including Francis: the Journey and the Dream, by Murray Bodo, the Rule of the Secular Order, various writings by St. Francis and St. Clare, materials related to the Second Vatican Council and other related topics. He also met monthly with Carol Fischer, OFS, director of formation for St. Margaret of Cortona Fraternity, along with Pat McCloskey, and attended regular fraternity meetings.

David admits to being very nervous leading up to his profession and said, “I didn’t quite know why.” He then realized that it came from a “false sense of self-sufficiency and thinking ‘can I do this?’ I realized it’s not me doing it, but God, and there were so many people praying for me and supporting me, that when the day came, I felt calm, peaceful and joyful seeing so many familiar faces representing different parts of the Franciscan family.” 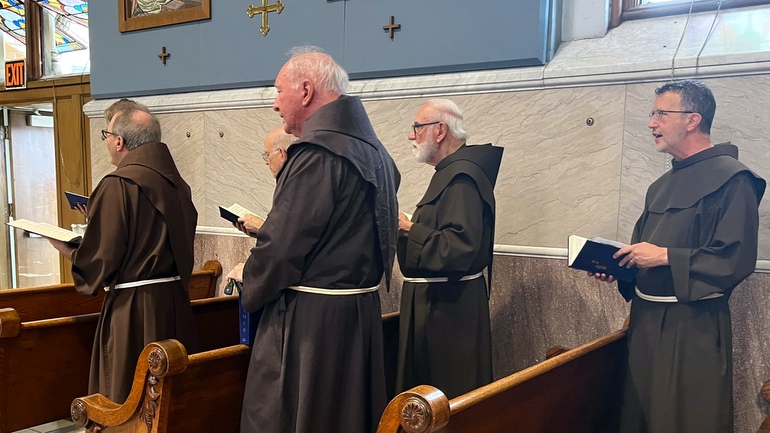 Friars in attendance at David’s profession.

He was especially touched by the presence of Fr. Dennis Wilson, OFM, provincial treasurer of Holy Name Province, who drove from New York to attend, and the SJB friars. “It was very special to me that the friars allowed me to have the profession at St. Francis Seraph,” David said. “Just by being there and working there, you can’t help but witness, experience and absorb the Franciscan charism. It was very fitting and appropriate and such a grace and blessing.”

During the homily, Al Hirt, pastor, said “We are privileged to be part of this profession ceremony for David, who is finding in St. Francis what most everybody in this church is also finding in St. Francis, and how people in Francis’ own day discovered something about him. For the first time in a long time for the people of Francis’ day, someone was living the Gospel, someone was taking a fresh look at what Gospel life looked like.”

“Today, we the members of St. Francis Seraph, the members of the Secular Franciscan Order, friars who are here, and maybe other visitors, are participating in a moment where someone wants to make that deeper commitment to this Franciscan way, believing that what Francis experienced and what Francis embraced as the way to the Christ is a valid and wonderful way for us also to explore our faith and grow in our faith. So with David and the Secular Franciscans and the parish, we celebrate this commitment, knowing that some years of preparation, prayer and reflection have gone into this so that he can say yes to that way of life, and for all of us, it’s a way again and again and again to try to say yes to this way of life in Christ.”

As David formally said “yes” to his commitment to the Secular Franciscans, he received a San Damiano cross, a Bible and a ring belonging to Carol’s brother, Fr. John T. Kramer, OFM, a friar of St. John the Baptist Province, who served as a spiritual assistant to the Secular Franciscans and passed away in 1995. “I was so incredibly touched that Carol would give such an extraordinary gift to me, something so precious from her younger brother that she loves so much,” David said.

In preparing to make his profession, David noted that he was looking forward to the public acknowledgement of the friars’ influence on his spirituality, as well as that of the Poor Clare Sisters, and all who identify with the Franciscan way of life. “The journey has been an ongoing evolution of growth in my spirituality,” he said. “I hope that continues for the rest of my natural life.”

SMA: One year after Hurricane Ida

A season of newness