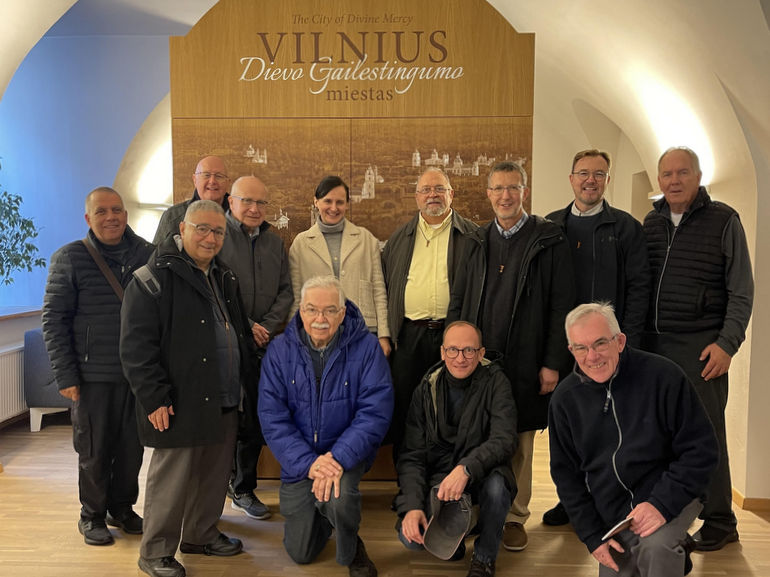 My conscious reason for going to Vilnius, Lithuania, was to participate with the other Provincials of the English Speaking Conference (ESC). I wasn’t certain what or who I would really find in Lithuania. While I had Googled the weather, I didn’t plan for the strength of the cold outside, and sometimes, inside. Did they use Euros? (Yes, they are part of the European Union.) Is English commonly understood and spoken? (The common language is Lithuanian, but most people also speak English.). I was going to somewhere I really didn’t know without clarity of what to expect. I was betwixt and between. I was in liminal space. 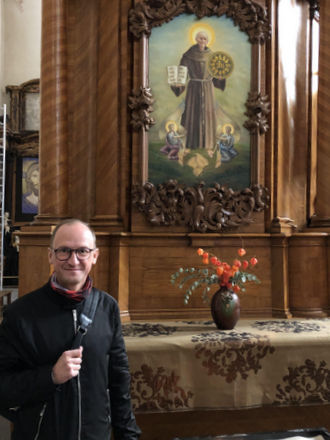 Evaldas Darulis with a restored icon of St. Bernardine, painted by his brother.

Pat McCloskey, the Secretary of the ESC, accompanied me. Our connections going from Cincinnati to Atlanta, on to Amsterdam, and squeaking onto the Baltic Airline to Vilnius were made pretty well. Sadly, our luggage didn’t clear that last leg. While it’s “just luggage,” it carried in my mind the one link that I would have to some normalcy. Thank goodness Pat was with me. Pat was much calmer and it carried over to me. I was able to borrow a winter coat for some of our walks from the Provincial of St. Casimir Province (Evaldas Darulis). He had an extra that came in handy when my windbreaker felt like paper. Brothers on their home turf gave genuine warmth to the poor travelers from Cincinnati. The leaves were already in full yellow and red bloom and left a blanket of splendor.

Wearing the same clothes for a number of days has the tang effect of wearing warm cheese. One whiff is enough. When the luggage showed up 24 hours later, I was over elated. Washed clothes gave back the feeling that all will be well. Plus, my power cord for the computer was in there!

The potential for Russian aggression is real (Belarus is an easy drive), and painful trauma memories affect many Lithuanians. Experiences with immigrants were a common theme, whether with people from Central America, or Ukrainians who just made it out of the country with their families. The migration of peoples and the need to provide basic necessities, and eventual stable homes, is important to all the friars. In Lithuania, the friary guest house was full with a Ukrainian family that is trying to assimilate.

Our meetings covered a number of topics. We looked at the effect of being a smaller Conference with a reduction in the United from seven provinces now to only two. We shared stories of our own provinces and heard different ones, but with similar tales of the brothers. “Oh, I know some friar like that!” Other provinces are beginning to consider combining. The US-6 and Canada were able to recount how our experience had gone. We were encouraged by the General Definitor (Jimmy Zammit) with his stories on the experience of the Northern Italian Provinces that are now one. We addressed some issues from him and his Council. We visited formation items between the ESC. We listened to the need for funding the Antonianum and the international nature and need of the students from the General Definitor. We approved the research of a Duns Scotus translation and the updating of saint prayers for the missal and breviary. 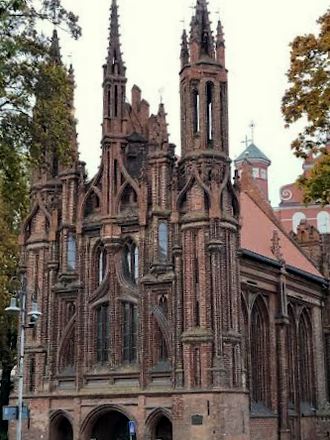 The friars’ church in Vilnius

We prayed together morning and evening prayer, with a daily celebration of Eucharist. We had a lot of fun together. Walking through the old cities of Vilnius and Kaunus (where we held meetings at the friars’ retreat house) was so picturesque. The streets are as winding as they were in the Middle Ages. Many had cobblestones. The people were warm and friendly, glad to see us. Meals were plentiful with traditional items. I was impressed when I ordered dumplings and sausage to discover that they served two large potato dumplings the size and shape of a nerf football, stuffed with a sausage meat and covered in a bacon gravy—enough to add a few kilos on! It seemed meals, even breakfast eggs, needed at least a side of potatoes. The Provincial of Lithuania enjoys hunting for mushrooms, which were served in a special mushroom soup on our arrival.

The thing about liminal space, like being on a pilgrimage, is that we have times of not belonging and belonging. Because it is unfamiliar, we must loosen our grip on how things should be in order to be open to something new being born. It allows a deeper spiritual dependency on God and others (like Pat McCloskey). We are shaken out of habitual, ordinary living into a space that allows us to reconsider who/what is really important.

As we were waiting on boarding a plane on Saturday morning, Pat and I read a brief account of the life of St. Teresa of Avila, which ended with a quote from her that I found to summarize this one week of liminal time: “Remember that you have only one life, which is short and has to be lived by you alone; and that there is only one glory, which is eternal. If you do this, there will be many things about which you care nothing.”

So much for concern over lost luggage!