An adventure and a mission 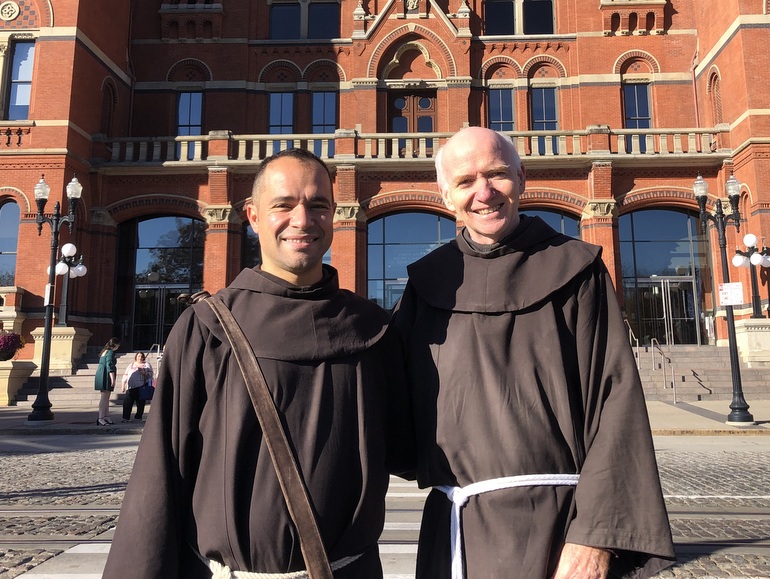 Brothers Alessandro, left, and Eunan pose for a photo in front of Music Hall. Photo by Fr. Mark Soehner, OFM

Br. Alessandro Brustenghi, OFM, a friar of the Assisi Province, was the special guest during a choral concert sponsored by Miami University (MU), and Seton and Elder high schools at the Cathedral Basilica of St. Peter in Chains on Nov. 2.

Hailing from Castiglione della Valle, a small Italian village not far from Perugia, the humble friar is now an internationally known tenor after landing an exclusive recording contract with a major record label: Decca Records in London (part of Universal Music Group). His debut album, released in 2012, is titled “Voice from Assisi,” and rose to the top of the charts in the Christian and Gospel category for that year. Two additional albums followed: “Voice of Joy” (2013) and “Voice of Peace” (2015).

“I am simply sharing the Franciscan message of joy, peace and God’s love,” Alessandro said.

He started playing music as a child, with the initial goal of becoming a composer and organist. When a teacher asked him to join a music class in need of more students, he did so, but admits that “I didn’t really like singing so much.”

Over time, with additional training, much of it on his own, along with studies at Conservatorio Francesco Morlacchi in Perugia, Alessandro said, “my operatic voice came out.”

The friars first noticed his beautiful voice during a vocal exam as part of entering the Order. After some of his recordings were introduced to a music producer, he was invited to London to produce an album of sacred music, both traditional and contemporary, at Abbey Road Studios. 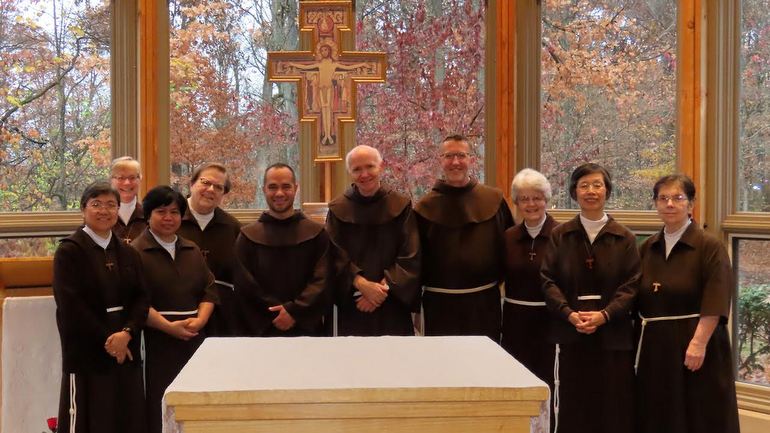 The flight to London, Alessandro’s first time on a plane, was the start of both an “adventure and a mission.” He travels with his manager, Br. Eunan McMullan, OFM, who helps organize and publicize his singing engagements, and is encouraged in his ministry by his provincial leadership. “My provincial told me this a good way to evangelize,” he said. “And, we understand we are not alone in mission. We travel two by two, spreading the Gospel with music.”

In order to be present to others and in accordance with Franciscan poverty and simplicity, the friars wear their habits everywhere, only fly coach, stay in local friaries or with other religious communities while traveling, and donate all proceeds from the sale of CDs to mission efforts. Alessandro readily admits that he doesn’t really enjoy traveling and is uncomfortable with performing, along with the accompanying fame.

“It’s an effort for me, but I do it because it’s a beautiful way to meet people and make God’s love known,” he said. “I meet Jesus in the people I meet. I meet Jesus in music. God has shown us His love through Christ, and I want to show people that love.”

During their time in Cincinnati, Alessandro and Eunan stayed with the SBJ Friars at the Pleasant Street Friary. They also visited with the Cincinnati Poor Clare Sisters. “We are delighted to return to Ohio, and for the first time visit Cincinnati, where we have enjoyed the warm hospitality of our brothers of the St. John the Baptist Province and made new friends,” they said.

Alessandro’s performance at the cathedral basilica featured selections in Latin, Italian and English and included “Panis Angelicus,” “Ave Maria,” “Amazing Grace” and “Make Me a Channel of Your Peace.” The MU Chamber Singers and their Choraliers, the Seton Concert Choir and Elder Glee Club also performed. A second concert was scheduled for Nov. 4 at Miami University. The local performances are part of a U.S. tour for Alessandro that includes concerts in Wilmington, Del., and Washington, D.C.

Journey into our roots: a Southwest pilgrimage