Celebrating “Francis: The Journey and the Dream” with Fr. Murray Bodo, OFM

It’s been 50 years since Murray Bodo introduced St. Francis to the world in a new way with his book Francis: The Journey and the Dream. The book presents Francis less as a historical figure and more as an everyday person. Since then, thousands of people have met St. Francis on its pages. 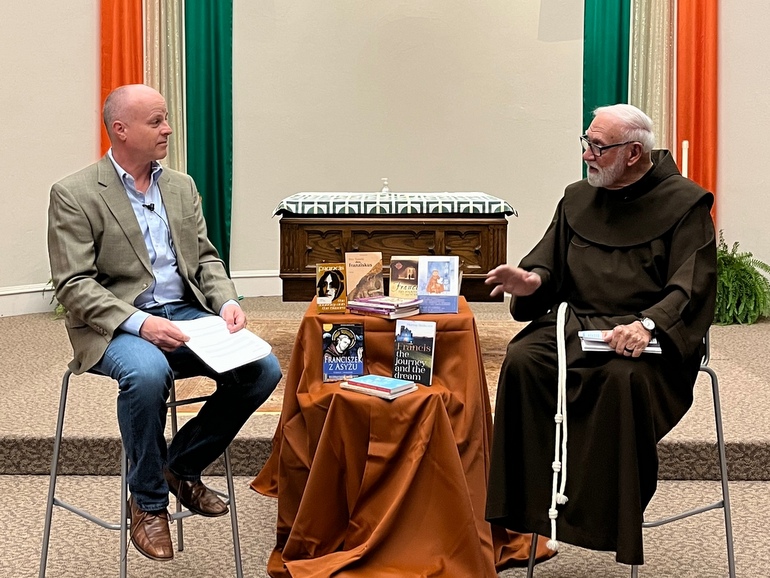 To mark the anniversary of Francis: The Journey and the Dream, Franciscan Media hosted an evening with Murray on Oct. 12 at St. Anthony Shrine. In addition to the friars, friends, and donors gathered in the Shrine chapel, a wider audience tuned in virtually. The event included readings by Murray from his book, as well as reflections, questions and some of his original poetry.

Dan Kroger, president/CEO of Franciscan Media, started the event off by thanking and welcoming those in attendance. “All of us are trying to really make the vision of Francis and his goodness and love stand out in our world today,” he said. “Today we celebrate with Murray a book that has touched the hearts, minds and souls of people all over the world.”

Chris Meyer, development director at Franciscan Media, then introduced Murray, describing him as a teacher, poet and spiritual writer and shared his various works. He went on to ask Murray what was happening in 1972 that inspired him to pen Francis: The Journey and the Dream. Murray noted that he was teaching and doing spiritual direction at the high school seminary and writing some poetry on the side, when he was approached by Jeremy Harrington, then editor of St. Anthony Messenger, and Roger Huser, provincial, who wanted him to write a popular book that would accompany the Franco Zeffirelli film, “Brother Son, Sister Moon.” Not long after, one of the seminarians who came to Murray for spiritual direction, told him, “You’re going to go on a long journey. It’s going to be the fulfillment of one of your dreams.” That conversation, Murray said, eventually inspired the title of The Journey and the Dream.

Soon the young friar, who had never been outside of the United States, was on a plane bound for Italy, then a train to Assisi. Murray acknowledged that the prospect of writing a book was initially a “frightening thing for me.” As he traveled toward Assisi, though, he felt “I was moving back in time, back into the Middle Ages. It was like I knew I was going to be okay because I’m right there with Francis,” he said, noting that he would spend his mornings writing, still his practice today, then in the afternoon go out and find his inspiration for Francis, the brothers and Clare among the people and was inspired by the encounters he had.

Chris asked how Francis is inspiring Murray today and his message for all of us. “He continues to inspire me, obviously,” Murray said. “This is the life I’ve embraced, to be a follower of Francis. I think of him more and more because of the historical context we’re living in now. There is so much division. There is so much hatred. There is so much uncivility. I think of Francis and how he wanted to bring people joy and peace, and he struggled his whole life with becoming a peaceful person. I think people saw that in him. He kept working to bring to people to Christ, and the name of that is peace. If you bring people to Christ, you bring them peace, at least peace of heart, peace of soul. I think of Francis a lot and the need for his vision. We need that vision today.”

And what would Francis’ dream be for us, Chris asked? “The wonderful thing about Francis is that he was very practical,” Murray responded. “Towards the end of his life when asked that question, he would say, ‘I have done what is mine to do. May the Lord show you what is yours.’ He wasn’t thinking he had to save the world. He responded to the word that was given to him. His wish for us is that the Lord will show us what is ours to do.”

As the evening came to a close, Chris thanked Murray for sharing his gifts and the friars for their generosity and hospitality. “I feel very blessed that you shared so much with us in just an hour, in a very rich, rich time with you,” Chris said. “May God bless you on your journey and in your dreams. Thank you, Murray, for sharing both.”

To view the event, visit https://www.youtube.com/watch?v=HBuYr-at7xM