They were valuable skills in the life of a friary 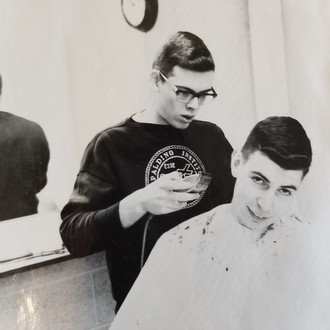 Faced with pandemic shortages, housebound for long periods, we’re learning to make things, grow things, fix things, and if necessary, do without.

For friars of a certain age, this is nothing new. At St. Francis Seminary in the 1960s, “Everybody kind of pitched in and did what needed to be done,” says former Dean of Students Ric Schneider. Elsewhere, young friars in formation pulled their own weight, making shoes and habits, cooking, cleaning, building and repairing, grooming the grounds. “Besides that,” says Jim Van Vurst, “we went to school.”

The practical skills of brothers and clerics helped the novitiate and communities like Duns Scotus, Oldenburg and St. Leonard function like little cities, nearly self-sustaining. “There was an ecosystem that developed around them,” says Bill Farris, who as a seminary student learned the basics of barbering.

“As large as our communities were in those days, there was always somebody who had some skill,” says Ric, who managed maintenance at the seminary in Cincinnati. John Bok scrubbed and waxed floors at St. Leonard College in Centerville, Ohio; carpenter Blane Grein made kneelers for the chapel. At Duns Scotus College in Southfield, Mich., Jim ran the cobbler shop; Carl Langenderfer re-wired the library office. “We learned on the job,” says Norbert Bertram, who made habits and vestments at the theologate in Oldenburg, Ind. 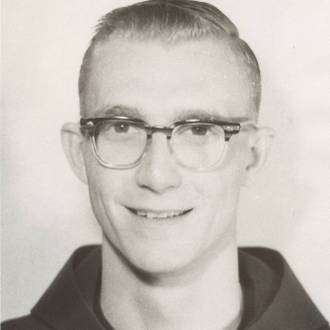 Fr. John Bok, OFM, when he was a cleric.

And it gave them an outlet for youthful energy. “It kept us occupied,” says John.

In the not-so-distant past, friaries were “much more monastic,” Jim says of his early years with SJB Province. In the 1950s, “We were sort of quarantined,” John says of his life as a newly professed friar. “We were home almost all the time.” Except for visits to the doctor, “We never went anywhere,” says Bruce Hausfeld, whose work periods at Oldenburg were occupied with scrubbing and waxing floors. At the novitiate, “The novice master took us to Mt. Airy Forest twice in that whole year as a treat. Our family could come and see us at Christmas and Easter.”

With mobility restricted, clerical students looked forward to twice-weekly work periods. “It gave us something to do in our free time,” says carpenter Blane. “And it gave me satisfaction in accomplishing a job.” 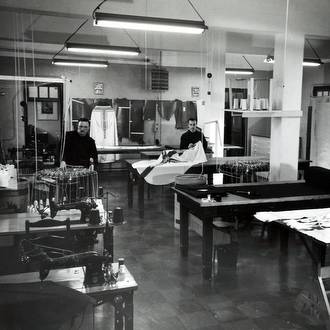 For the brothers, essential skills were often their fulltime jobs. “Francis Williams cooked seven days a week at Duns Scotus, and he did it all himself,” says Norbert, one of seven tailors at Oldenburg in the 1960s. Mentored by Richard Kloster, who later became a missionary, Norbert made habits and vestments for friars throughout the province. “I was blessed to do it,” he says. In his later work in parish ministry, “I got in involved in all kinds of stuff,” but he never forgot the craft that had served so many. In retirement at Cedar Lake, Ind., he has a fully stocked tailor shop – and still makes habits.

When Ric was a lad in Louisville, Ky., “You always tried to make do; that was the way we were brought up,” he says. Life with the friars was much the same. “With the vow of poverty you did it yourself or got someone you knew to do it. I think that’s what Francis would do. He certainly talked about work but said, don’t let the work interfere with your prayer.”

When he entered the seminary, Carl knew a thing or two about carpentry and electrical work, talents he applied to re-wiring and building projects at Duns Scotus and St. Leonard.

Blane picked up carpentry by osmosis. At home, “My dad was a handyman. We had a jigsaw, a wood lathe, a drill press, a table saw and loads of tools.” When he joined the friars, “It served me well, because in all 13 years of formation I did not have to take my turn at cleaning toilets, sweeping corridors or washing windows. I always worked in the carpentry shop. It saved [the friars] a lot of money.” When he made it himself, “I always knew it was going to be done right.”

As a junior at the seminary, Bill weighed his options. “I went up to Ric Schneider and said, ‘I would like to be the class barber.’ It became a job I had for probably the next 11 years.” He never regretted his choice. “While other folks were raking leaves or cleaning johns, I was upstairs cutting hair.”

With no formal instruction, “You just learned from the older students.” The first day, “I showed up at the barber shop” on the third floor near the bell tower, “and they showed me what chair I would use, what clippers were available. I had plenty of people to practice on.” In three hours he gave eight haircuts.

“We had an active barber shop with six chairs. It was a good atmosphere, kind of a nice place to unwind,” Bill says. “It helped me keep a schedule and make decisions around time, try to do a good job and listen to what was asked for, and also become a better conversationalist. In that kind of environment you learn to create conversation and keep it moving.” 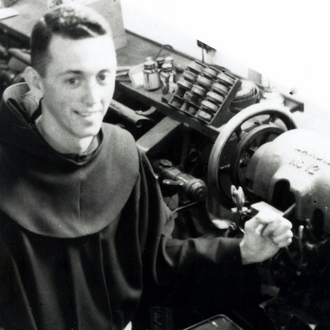 Twice a week for four years, Jim spent three hours in the cobbler shop in the basement of Duns Scotus College. “A lot of work went on there,” he says. “There were four of us who worked Wednesday and Saturday putting half-soles on tennis shoes and making sandals. I say this not with vanity, but we did some good stuff because we had the right tools.” Those sandals lasted “a pretty good while, sometimes for years.”

With a client pool of 80-100 brothers, teachers and clerics, there was no shortage of needy soles. Production was simple but exacting. For fittings, “Imagine taking a piece of paper and tracing the sole” to be cut from 3-by-5-foot sheets of leather they purchased in downtown Detroit. “You have your stitching machine” – a monster they called “Molak” – “to stitch together two pieces of leather that were maybe a half-inch thick. If you got your fingers stuck in Molak,” Jim says, “it was done. That big needle would go right through a bone, no problem.” Fortunately, “Nobody ever got hurt.”

Outside the cobbler shop, “It was a real busy place,” Jim says. “We had tailors and farmers and waxers. Each area had its own pride in its own way of working,” much of which was displayed in the annual Sport Book scrapbooks compiled by students to showcase their areas of expertise. Preserved in the Archives at Mt. Airy, they reveal the many skills that kept large friaries functioning. “The ones who worked the hardest were farmers,” Jim says. “They had the longest hours.” 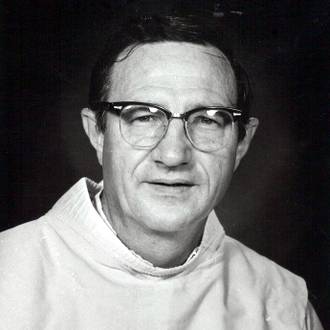 Friar Richard Kloster was a mentor to many young friars.

Toughest job? That honor goes to Bruce, who shoveled horse manure for the garden at the novitiate at Mt. Airy. The olfactory imprint was indelible. “We would be saying vespers and compline, the windows were open, and every afternoon a guy would bring a load of manure, and you could smell it as he drove up the hill,” says Bruce, who moved up in the world during his studies in Oldenburg. There, “On Wednesdays and Saturdays, from after breakfast till noontime, we scrubbed and waxed floors. I think most guys enjoyed it; it broke the routine of being in the classroom most of the time and there were no teachers around.”

When John waxed floors at St. Leonard’s, “We took our job seriously and tried to do the best we could. There was one guy from each class on the wax crew. When you were a rookie, you learned from three guys in classes ahead of you,” he says.

“We had these big stripping and buffing machines. It took some knowledge of how it all worked, as far as stripping the old wax off and putting the new wax on and buffing. I personally took pride in that these floors would really shine.” What’s more, “It got us out of our rooms and away from studying. My memory is that we sort of enjoyed the work times.” 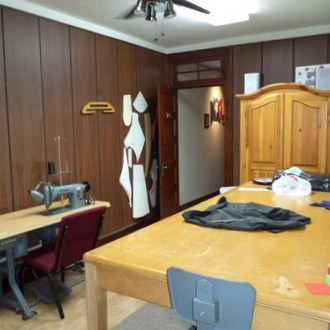 In the 1960s the need for sandal makers declined with the availability – and attractive price point – of Dr. Scholl’s footwear. “There were so many changes going on” in the Church, in friaries and in the world, Jim says. “By my third year at Duns Scotus, we were basically doing repairs, not going downtown to buy leather.”

As larger communities closed, the need for many “essential skills” went with them. “Once Vatican II challenged us, we sort of quickly adapted,” John says.

Since then, “The focus on fraternal service has become less, with a focus on ministry outside,” says Bill. “But it’s still a very valid and necessary part of our Franciscan life.” And the pandemic has reinforced his point. At St. Anthony Friary, “When we were in the lockdown weeks, we all took turns cooking, those who could. I thought it was very healthy we were able to contribute to the community that way.” And while barber shops were closed, Bill again took up scissors and clippers, cutting the hair of fellow friars.

Some of those long-ago skills remain dormant. “I never scrubbed and waxed a floor after ordination,” says John. But if someone needed to have their floors done, “Probably to this day I could pull it off.”

Toni Cashnelli is the Director of Communications for the Province of St. John the Baptist.

A jack of all trades 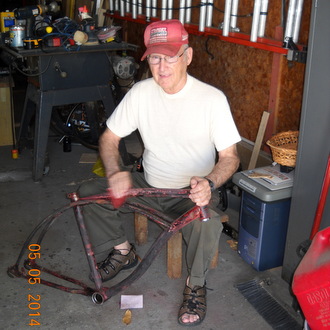 “I was brought up with the idea that as a religious brother I was to serve the community wherever I was assigned, as best I could.” In Juniper’s case, that covers a lot of territory. His official ministry is as SFO Provincial Spiritual Assistant. But wherever he serves he’s often been an anchor of the community, the guy who does everything from laundry to landscaping, from cooking to carpentry, from fixing cars to fixing boilers.

And despite the professional quality of the results, “I never considered myself a skilled worker,” he says. “I do the best I can.” It’s been that way since 1953, when 20-year-old Juniper entered the Order through the Custody of the Most Holy Savior in Pittsburgh (united with St. John the Baptist Province in 2000). “It had just become an independent custody from the mother province in Slovakia.” When that province was suppressed by the Communist government, “We could no longer rely on them for manpower or financial support; we were independent.”

Resources were limited, so in terms of onsite labor, “Brothers did whatever needed to be done,” whether it was mowing 40 acres of lawn or cleaning the guest rooms at St. Francis Retreat House in Easton, Pa. “When I knew I was going to be doing cooking for retreats,” Juniper took a course in hotel-motel management at a community college. He’s always ready to learn something new because, as his friar-mentor Florian Lalles once said, “You never know; it might come in handy.”