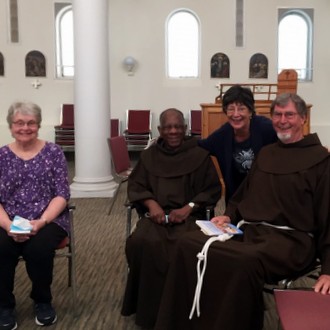 At our recent SJB JPIC committee meeting on May 17, we were talking about how Laudato Si’ and Fratelli Tutti could become foundational documents for the new province. Since the beginning of Lent we have already been using Fratelli Tutti as a stimulus for reflection at our Masses at Mercy Community at Winton Woods in Cincinnati.

Early in Advent I began using the theme of the readings and a question to ask the congregation to reflect on their own experiences in life to see how God was inviting them to a change of heart or to grow in their spiritual life.

After Christmas we bought copies of Fratelli Tutti from Paulist Press and began using the ideas and Pope Francis’s method of reflection to continue this process of looking at how we feel and think about our own lives and what God could be saying to each individual.

At the daily Masses I often begin homilies with a story from my own life in Africa about something that happened which fits with the theme of the readings for that day. I look for examples from everyday American life that might fit that same feeling or experience in the life history of our elderly congregation. I then refer to a paragraph in FT where Pope Francis is dealing with the same topic or situation, and end the homily with some ideas about how our experiences can lead us to a better way of thinking and acting. In the Mass intercessions I try to connect what we have thought about to prayers for the actual situations in our current American and world events. 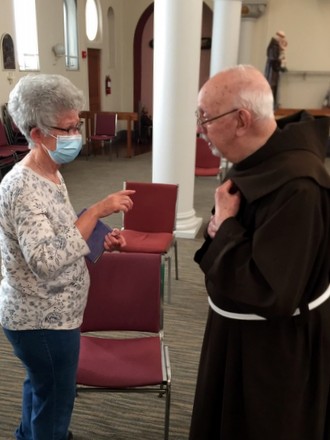 During Lent on Thursday mornings after Mass, I invited members of the chapel congregation to stay and share their questions, ideas, and experiences from paragraphs in a particular chapter of FT. We went chapter by chapter to focus on similar topics. Our group is often six to 10 persons, but people have shared wonderful experiences from their own lives. One person shared, “At first I found the text overwhelming, but then I realized that this was the first time I have read something from the Vatican that I could understand.” From Pope Francis we have learned that often there are no right or wrong thoughts or answers, but that we can all learn from what others share. People need to be valued for who they are and not simply told what to think or what to do.

Within the entire congregation we have developed a sense of belonging and familiarity. There is a great deal of interaction and conversation after the Mass has concluded. People with very different theological and political backgrounds have begun talking with one another. My stories from the Philippines, Malawi, Kenya and other times and places have allowed people to tell their own stories without embarrassment.

The other day Br. Dominic Lococo commented: “You think I don’t listen, but I do. Those stories about apartheid in South Africa and Palestine are just as true right here in the USA.” Some JPIC members also found the FT text “overwhelming,” but then realized that Pope Francis is giving us a model of how to build relationships with one another. His way of looking at the realities we experience in day-to-day life, and then looking at what is really happening in the way we think, see things, and make decisions leading to what we do gives us a model for reflecting on how we actually do relate to one another and what better ways we could learn. Years ago in the Basic Ecclesial Communities on Biliran Island we called this methodology the “dialogue of life.” It changed our whole way of ministry and being Catholic.

Fratelli Tutti offers us many possibilities as a new province.

Peace and all good!

A reminder: Fr. Pat McCloskey and Sr. Margaret Carney coordinated the eight-part study guide to Fratelli Tutti that is posted on our province website at: https://www.franciscan.org/fratelli-tutti/